This week has seen us visiting some of our regular customers,  St Micheals hotel in falmouth called us with a problem, they have recently acquired another building adjacent to the hotel which used to be part of the Falmouth hotel the building is being completete refurbed from top to bottom, but unfortunately the keys to a set of upvc patio doors that lead out to the gardens had been misplaced!

Lost patio door keys is a typical routine job and is very common on upvc doors in both domestic and commercial properties, although saying that i have seen people attempt them by themselves and do more damage than good! 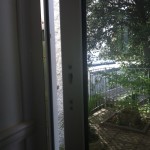 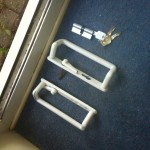 Patio door lock and new euro cylinder ready to go back on! 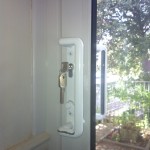 As this was a lost keys job the first thing was to pick the cylinder to the open position, once the door was unlocked it was then a case of removing the cylinder retaining screw and extracting the old cylinder, the old cylinder was actually not really suitable for the door in the first place as the ends of the barrel pretruded way past the handle fitting’s making the lock prone to snapping from the outside and potential burgulary!!

I will write a post with regard to cylinder snapping and ways to avoid it and the potential risks at a later date.

The new correctly sized cylinder was fitted along with the original handles after a liberal amount of lubrication which was required due to lack of use and the fact its so close to the Falmouth sea front!!!